Just because something is considered controversial doesn’t mean we can’t learn something from it. Take certain movies, for example. From nudity and obscene language to violence and depictions of drug abuse, there are films chock-full of potentially offensive features, all included to tell a story as truthfully as possible while making it practically impossible for viewers to turn away. Legendary director Martin Scorsese’s notoriously exhilarating flick has it all—and more—but if there’s one thing about it you shouldn’t forget, it’s The Wolf of Wall Street’s “sell me this pen” scene.

Now, to be honest, although it’s famous, that scene is pretty unremarkable compared to most of the scenes that make up the box office hit. There aren’t people having sex, snorting coke, or having insane parties with hookers and midgets. Yet, surprisingly enough, it not only imparts several marketing principles but also important business and life lessons. Read on to find out what those are.

Jordan Belfort Asks People to Sell Him a Pen

Before we get ahead of ourselves, let’s recall the person the film is mainly about and what went down in the well-known scene.

Jordan Belfort is a former Wall Street trader who has committed more than a few crimes. Most of them are related to stock market manipulation, but they also include drug running and abuse. He has served 22 months in prison and now makes a living as an author and motivational speaker.

We could go deeper into the details about the so-called Wolf of Wall Street’s life, but for the sake of keeping this article focused, we decided to keep that part down to just Jordan Belfort’s clean version.

On to the famous scene.

In it, you’ll see Belfort, played by the inimitable actor Leonardo DiCaprio, eating at a diner with some of his colleagues from Stratton Oakmont, the company he and his friends established. He tries to make them realize that every potential client they call on the phone won’t give them so much as the time of day unless the brokers help them get rich.

“They want to get rich quickly” and “don’t want something for nothing,” Belfort tells them.

One of them tries to disagree by recalling some guy he knew who only wanted to “sell furniture.” Confusion ensues, but Belfort regains control of the conversation by asking, “Do you guys not wanna make some f**king money?” His friend answers, “I wanna make some f**cking money. I can sell anything.” Belfort challenges him by saying, “You can sell anything? Sell that… Sell me that pen.”

The guy hesitates, so Belfort hands the pen over to Brad, his other friend, and tells him to do the sale. Brad succeeds by making Belfort realize he can’t write without his pen. The “furniture” guy tries to make fun of Brad’s achievement, but the point is already made clear: when it comes to selling, it’s the things we need that we’ll always be grabbing for.

Key Marketing Takeaways from This Scene

If looking solely at the Wolf of Wall Street’s sales pitch—something that’s pretty much as famous as the “sell me this pen” scene itself—you’d think the scene is only about how to sell someone a pen. Actually, it’s much more than that. For starters, there are plenty that marketers can learn from it:

Most people who’d try to sell Belfort the pen would most probably do so by just making it look great instead of convincing him he needs it.

We can pine enormously for the things we want, but at the end of the day, it’s the things we believe we need that we end up spending most of our money on. There’s no avoiding it. No matter how much you want a new phone, computer, or car… food, the rent or mortgage, water, and electricity always come first.

To promote things that might not seem important at first, marketers make them appear so. To do that, you have to figure out how to make your customers realize they need the thing you’re advertising. You need to find out what their needs are and how your product satisfies them.

You might be the best marketer in the world, but if you don’t take the time and effort necessary to really know your customers’ needs, there’s no guaranteeing your campaigns will be successful. To make sure, you’re going to have to ask them.

If we were to apply this technique to The Wolf of Wall Street’s famed scene, Belfort’s pal should have started selling him back his pen by asking him what he does for a living. By doing so, he would’ve found out how getting back the pen would’ve been important to his work. Belfort, as the customer, would’ve realized he needed the pen, so he would’ve definitely bought it back.

Urge them to take action

Some customers are easier to convince to buy something than others are, but almost everyone is susceptible to the right persuasion. Persuading them to see things from your perspective involves making them feel a sense of urgency to do what you want. There are plenty of ways to go about this in marketing.

For example, if you were one of the guys trying to sell Belfort back his pen, you could offer him an incentive for paying for it right away, then set a deadline for when the incentive is valid. He could lose out on your offer if he takes time making a decision, prodding him just enough towards making the purchase.

While we did say it was a mistake for the would-be salesmen to make Belfort want to buy back his pen just on how good a pen it was, it makes perfect sense to make something seem amazing if you’re marketing it. You just need to go about it the right way.

The pen might have been the same as any other ordinary pen, but if you want to make something appear as valuable as it can be, highlight how writing with it will make the user’s life better. It could write faster than any other pen, making him or her even more productive at work. It could write smoother, making his or her writing more attractive and engaging. Its ink could last longer, decreasing the amount of money he or she usually spends on office supplies.

No matter which way you frame it, as long as you manage to increase the product’s value in the eyes of your target customers, your campaigns will be successful.

Not all customers are the same. Apart from having different needs, they respond to campaigns differently. If you do only one type of campaign, some will like it, while some won’t. That’s why you need to come up with a custom campaign for each audience you’re targeting. It’s the only way you’ll be able to pique their distinct interests.

Say you’re marketing to teenage boys and middle-aged women. Doing so successfully will need the help of appropriate influencers. For young men, those could be renowned actors their age or star athletes. For 30-to-50-year-old women, those could be successful female entrepreneurs or thought leaders.

What Can We Learn from Jordan Belfort’s Story?

There are many lessons about life that you could get from the movie, but three that increase one’s chances of becoming a successful entrepreneur are worth pointing out:

Belfort didn’t start out as a wealthy killer stockbroker. Just like everybody else, he started from the bottom, trading penny stocks in a dark, cramped, and dingy office. But he was hungry enough to get ahead and worked astonishingly hard to make it. And make it he did. Be as clear and focused on your goal as he was, and there’s virtually no stopping you from succeeding.

Everybody who worked for Belfort considered him and each other family. They shared such a tight-knit bond that, for better or worse, they would’ve done anything for Belfort and their enterprise.

We’re not telling you to have such a potentially destructive bond with your employees, but if you manage to build real relationships with them, your company will prosper.

Hold on to your values

The Wolf of Wall Street is essentially a cautionary tale of how Belfort wasted everything that truly matters for money, fame, and success. Things would have turned out differently had he not sacrificed his values. Don’t make the same mistake. Stay consistent with yours. They will guide you through when the going gets rough.

Still not convinced Jordan Belfort’s the real deal? Here’s more if you want to find the answer to ‘is The Wolf of Wall Street a true story?’. 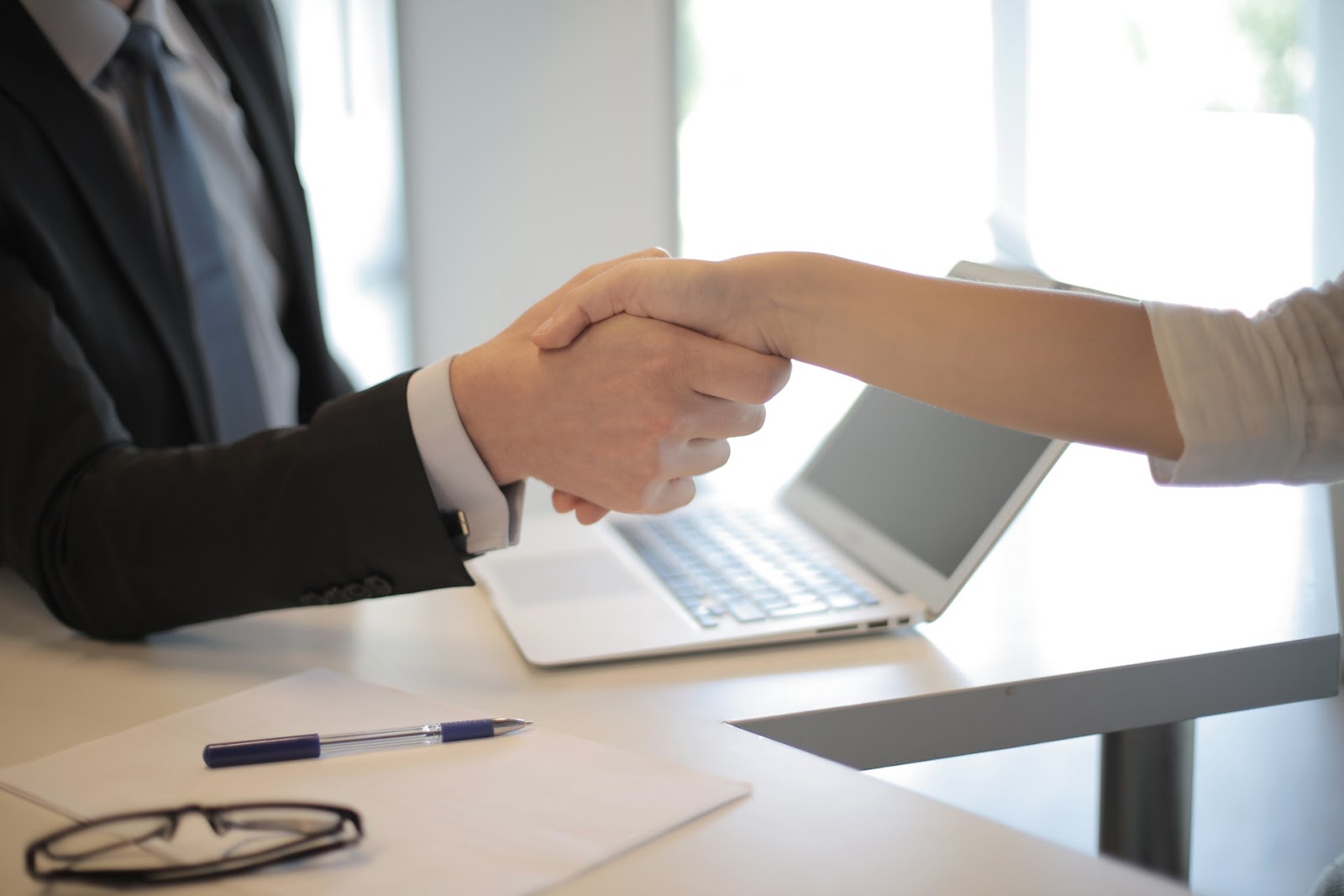 Shamelessly provocative, Scorsese’s striking work may rub some people the wrong way. But, as The Wolf of Wall Street “sell me this pen” scene proves, whether it’s about marketing, business, or even life, you can gain valuable knowledge in even the most unlikely places.Check out this page to learn more about business tips and tricks!

How to Progress Your Career in Sales

How to Succeed with an Online Degree

How Does Great Lakes PG Program in Strategic Digital Marketing Help You Advance Your Career?