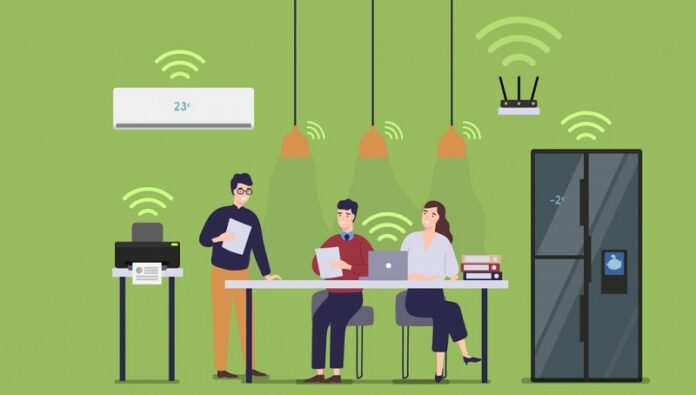 For many years, technology companies have promoted the idea of a connected future, with autonomous devices improving the way we work and do business. Finally, in 2020, the hype is becoming a reality and the Internet of Things (IoT) is starting to deliver on the promises.

What is the IoT

Before discussing how the IoT is changing the workplace, it’s probably best to define what the term means. In essence, the Internet of Things describes an internet used by smart devices. In the same way we log onto the internet to find or share information, an increasing number of smart devices are now also connected.

Using the correct protocols and languages, these devices can be programmed to ‘communicate’ autonomously with one another over interconnected networks – hence the term internet of things.

Any device that is capable of gathering and sharing information online is considered IoT-ready. Coupled with Artificial Intelligence (AI), these smart devices can then make decisions and perform actions based on the information received – fully autonomously with zero human intervention needed.

Increasingly, smartphone apps are being coupled with door entry systems to control access to the workplace. These smart-systems can be pre-programmed to recognize the handshake credentials contained in the app, potentially going so far as granting access based on levels of permission. For example, you could use authorization rules to limit employee access to certain parts of your building.

Companies like Jackson Fire, an access control Manchester company, has been developing advanced entry control systems for many years – automating the task of controlling employee movement through premises.

Using connected IoT devices, you can monitor the physical workplace environment and provide optimal working conditions. Rather than leaving employees to decide how cold or warm a room should be, new thermostat apps can automatically set the temperature of a room, saving your company money – and also reducing inevitable arguments about how warm or cold things should be.

In the age of the smartphone, we’ve all become increasingly au fait with the idea of personal assistants. However, using the IoT, you can take the concept considerably further. Personal work assistants can automate arranging meetings, check the availability of conference rooms, manage your work calendar and even schedule virtual appointments. Voice-enabled, digital work assistants improve productivity by automating many of the tasks we previously had to do manually.

Reports suggest there are now just over two billion internet shoppers worldwide – a figure that has almost doubled since 2014. With so much commerce happening online, the traditional shopping models have been replaced with AI/IoT automation of much of the procurement and delivery processes. Using smart tags and sensors, it’s now possible to monitor inventory, automatically re-order stock and keep track of goods through the entire delivery process.

There isn’t always a direct correlation between the number of hours worked and actual staff productivity. Using the IoT, it’s possible to monitor employee efficiency by thoroughly checking their output.

For example, you could track the amount of time one employee spent on a task and compare it to his peers to identify potential gaps in knowledge or detect where extra training might be appropriate. IoT sensors and cameras can be programmed to work in tandem with software to predict and keep track of employee output accurately. The IoT is still very much in its infancy and much of its potential has yet to be explored fully. One thing’s for sure, however – in a connected world filled with smart devices, technology and automation is going to play an increasingly dominant role in the workplace of the future.