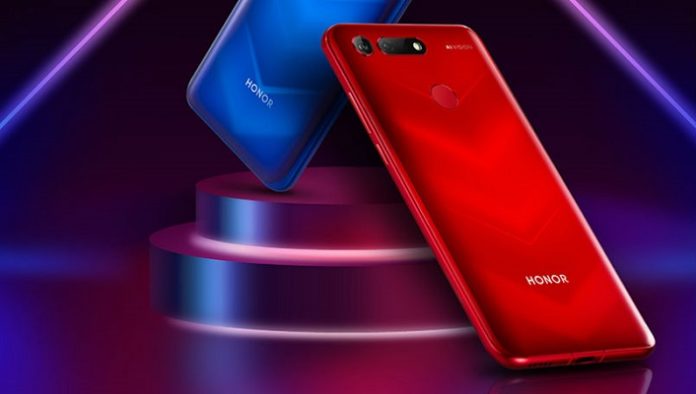 Honor V20 is soon to hit out the Indian market next year. Honor had announced previously that the phone will feature a Kirin 980 chipset with an advanced 48-megapixel camera, 25-megapixel screen camera, and Link Turbo technology. Though the China price has been set up to 2,999 Yuan, India expects to cross the 35,000 threshold.Avail Amazon Coupons to have best rates for your purchase.

Honor’s last flagship Mate 20 Pro was just incredible with the quality features loaded. Though the latter competed with the likes of seventy grand ranged device, this might compete with 40 grand devices like One Plus 6.

This almost bezel-less device gets a premium look with metal and glass combination design. Also, Honor claims that it is the first V-series device to sport 3D glass with V-shaped design which appears when the light is reflected on it.

The front cam setup is no longer on the top bezel but has been slid under the screen. The display hole technology was predicted by many Twitteratis and now it seems companies are saying goodbye to notch too.

The device packs a 7nm Kirin 980 chipset which is supported by up to 8GB of RAM. The handset offers inbuilt storage of 256GB with no microSD card support.

Honor V20 is equipped with 4,000mAH battery with 4.5V/5A rapid charging support. The device runs Android 9.0 Pie OS with EMUI 9.0 UI out of the box. Moreover, V20 also has the YOYO AI smart assistant that was announced first with Honor Magic 2.

Not only this, but Honor V20 also gets GPU Turbo Technology which accelerates the GPU performance. as per the company, the GPU performance of the Honor V20 is 20 times better than mainstream smartphones. Honor also claims that the Honor V20 powered with cloud computing solution can deliver 10 times better gaming experience than PC. In fact, the Honor V20 can be turned into a supercomputer by connecting a large display, a mouse and a keyboard. The NINE liquid cooling system allows full heat dissipation for core heating sources of different parts for camera, CPU and charging IC. You can explore to buy with Flipkart Coupons to have best discounted rates.

Camera and other features

For the selfies, Honor offers an AI-powered selfie camera of 25-megapixel with f/2.0 aperture. The phone also comes with a 3D ToF which can be used for Augmented Reality. It will bring support for depth measurement, bone recognition, motion capture, 3D body shaping and 3D somatosensory games on the Honor V20. It also allows YOYO assistant to mimic real-time dance steps performed by the user by making 3D characters.

Honor has also partnered with Italian luxury brand MOSCHINO to release customized Phantom Blue and Phantom Red editions of the Honor V20 MOSCHINO edition. It will come out with 8 GB of RAM and massive 256 GB of internal storage.

Most probably, India will get the device’s release in January 2019 as it has already been released in China.