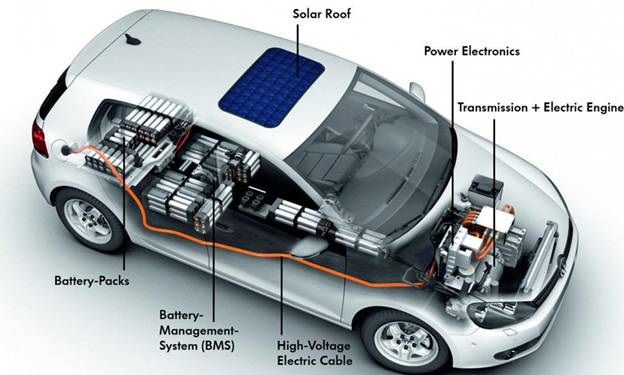 Introduction
Once mocked as toys, electric vehicles have become an inevitable step for the global auto market. The fact that electric vehicle sales are on pace to reach over 1.6 million this year, up from just a few hundred thousand in 2014 is enough to portray the future of this exuberant industry. The government support across various countries in the form of grants, subsidies, and tax rebates is proving to be major driving factor for electric vehicle market. Improving charging infrastructure, increasing vehicle range, and reducing cost of batteries have fuelled the demand for EVs across the globe. The major restraints considered in the study include the poor charging infrastructure, limited vehicle range, and the short lifespan of the EV battery, which restricts the sales of electric vehicles.

The Lithium-ion battery prices have tumbled by 80% in this decade. The prices are supposed to fall in coming years too. Policy support is another boosting factor. Governments around the world have offered generous EV purchase incentives to help get the market rolling. At the same time, tightening fuel economy standards will require significant electrification of the vehicle fleet, and China’s ‘New Energy Vehicle’ quota is forcing automakers into EVs faster than most of them would like. Increasing concern of environmental pollution, government level initiatives, and huge investments by automakers are propelling the growth of the electric vehicles market. The share that EVs have of global auto sales is still small – under 2% in most regions – but some countries are jumping ahead, and the next 20 years will bring major changes. Still, there are challenges. Charging infrastructure remains a barrier in many countries and supply of raw materials like Cobalt could create some bumps in the road to cheaper batteries.

FCEV
The FCEV (Fuel Cell Electric Vehicle) segment (zero-emission vehicles) is set to register the highest growth rate in the electric vehicle market followed by BEVs (Battery Electric Vehicle) and PHEVs (plug-in hybrid electric vehicle), because of the availability of better subsidies and support from governments. Fuel cell vehicles have better fuel economy and can travel around 300–400 miles with a full fuel tank with refueling time of the 3 to 5 minutes. It makes FCEVs an ideal option for transportation on definite route. However, the availability of infrastructure such as hydrogen production facilities and hydrogen refueling stations which support fuel cell technology is very scarce worldwide due to the increasing costs. Hydrogen being difficult to store and transport adds to the cost of the system. However, governments of various regions are thinking and investing to develop hydrogen-powered vehicles and hydrogen infrastructure. For example, recently in January the Canadian government announced an investment of USD 120 million to expand the electric vehicle charging and alternative refueling stations including hydrogen refueling stations.

BEV
Its Zero-emission nature encourages many governments to adapt BEVs. Various governments around the world support the sales of BEVs through their higher subsidy and tax rebate structures in comparison to HEVs and PHEVs. Increasing vehicle range and improving charging infrastructure have fuelled the demand for BEVs. Tesla Model S and Nissan Leaf were the most successful and highest selling BEV models in 2016. Decreasing battery prices, increasing environmental awareness among consumers, and decreasing charging time will lead the growth of BEV sales.BEVs are also the most preferred vehicles in China. With steadily improving charging infrastructure and reducing charging time, BEVs are expected to register the highest growth rate among all EV propulsion systems. Increased range and reduced cost play an important role in increased sales of BEVs. Cumulative sales of BEVs may soon cross one million units worldwide. BEVs are available in multiple segments including sedan, SUV, and hatchback. Many OEMs are launching electric vehicles to cater to the market demand. BYD (China) and Tesla (US) are the pure electric vehicle companies topping sales while OEMs such as Nissan, Toyota, and GM are also giving tough competition to electric vehicle manufacturers.

PHEV
Increasing number of charging stations in countries such as China, US, and the UK would positively affect the demand for PHEVs. The demand for PHEVs would also rise due to various tax benefits and incentives provided by the governments of different countries. For instance, the Japanese government is providing subsidies up to USD 8,500 for PHEVs. China is leading the market for PHEVs in the Asia Pacific owing to the availability of advanced technology and increased government incentives on purchase of PHEVs.

Vehicular Analysis
The passenger car is the largest segment in the global electric vehicle market. The growth can be attributed to the growing demand for fuel-efficient vehicles, increasing environmental awareness among consumers, and competitive pricing in comparison to the ICE passenger cars. The increasing support from governments in China, Japan France, Norway, and the US, and the OEM’s efforts to improve the existing EV models would drive the sales of electric vehicle passenger cars during the forecast period. Major OEMs have also announced the launch of the EV variants of their most successful IC (internal combustion) engine models.

Regional Analysis
Asia Pacific is the largest market for automotive Electric Vehicles. China is the largest market because of the government support and the availability of strong charging infrastructure. In 2017, 21% of all global EV sales were in just 6 Chinese cities, all of which have significant restrictions on buying and using new internal combustion engine vehicles. The alarming pollution levels in these countries have forced their governments to announce various kinds of financial and nonfinancial benefits to promote the sales of EVs. In Europe, the spectre of potential bans is pushing both buyers and automakers away from diesel. Urban air quality concerns have quickly become central pillars of municipal policy and EVs sales are benefiting.

Globally, many countries are now providing various incentives and tax rebates on the purchase of HEVs, which is ultimately driving the HEV market. Moreover, policies such as exemption from road tax, crowding charge waiver, and free car parks at various places have encouraged consumers to adopt hybrid vehicles. As a result, the adoption of HEVs is increasing, particularly in the Asia Pacific region. China, India, and Japan are investing a huge amount of money to encourage the adoption of HEVs. For example, schemes like National Electric Mobility Mission Plan, 2013 (NEMMP) are expected to drive the hybrid vehicles market in India.

The global electric vehicle market is dominated by major players such as Tesla (US), BYD (China), BMW (Germany), Nissan Motor Corporation (Japan), Volkswagen (Germany). Electric vehicle components manufacturers such as LG Chem. (South Korea), Panasonic Corporation (Japan), Delphi Automotive (UK), Samsung SDI (South Korea), Automotive Energy Supply Corporation (Japan), and EV infrastructure providers such as Car Charging Group (US) and Charge Point, Inc. (US) have the dominant influence on the market. Daimler, Nissan, Volvo and other global automakers have all made aggressive plans to electrify their vehicles over the next 10 years. Chinese automakers are going further, with companies like Chang’an committing to sell only electric vehicles after 2025.

Looking at the current pace, it can be confidently concluded that by 2040 around 55% of all new car sales and 33% of the global fleet will be electric. By the time, the cost ineffectiveness will be considerably rectified with falling battery prices and improving charging infrastructure. The depleting fossil fuel resources and the growing awareness regarding greenhouse gas emissions are compelling governments to formulate the regulations in line with the green energy. Electrified busses and cars will displace more than 7 million barrels of transportation fuel per day in 2040. China is and will be the largest electric vehicle market for future years. China will account around 50% of global electric vehicle market in 2025. Europe and US are next in line with around 14% and 11% current market share respectively.