Although Bitcoin has been the most volatile in the past few years, yet this has not deterred the criminals from collecting bits from the Bitcoins. When we talk about extortion, we have seen the emergence and effectiveness of Ransomware using Bitcoins and other forms of crypto-currencies. We have also seen Crypto-Currency Miner (sic.Monero) being deployed on hacked servers/systems, so as to take advantage of the computational resources and generate crypto-currencies. However, lately, we have seen a rising trend in extortion emails, asking for Bitcoins. 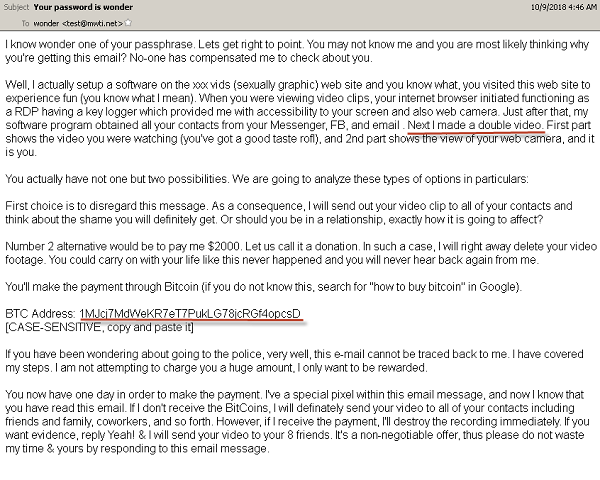 eScan’s research team has been analyzing and tracking these emails and most importantly, the Bitcoin addresses found in these mails. The Modus-Operandi of the criminals is to

During the course of research, we came across numerous wallets with one of them (3FJDeT2E1fWb4oZBeub4MH9ennUp5e4QG6) having received around 31 BTC and were then sent to other wallets. The criminals have sometimes transferred the BTCs to Escrow Accounts / Exchanges to further anonymize/convert the BTCs into cash. At the existing exchange rate of BTC, the wallet was worth 1,49,09,139 INR and thus the Spam Campaign can be considered highly profitable and successful.

Some of the BTC addresses of the campaign:

Due to the anonymity provided it is impossible to track the identity of the Wallet Owner. Since the month of August 2018, there has been a steady increase in these extortion spam mails.

According to eScan researchers these mails are a part of a spam campaign and advices that recipients shouldn’t reply to these emails. However, since this campaign is in its nascent stages, there is a possibility that in near future the emails might be weaponized with the usual variants.