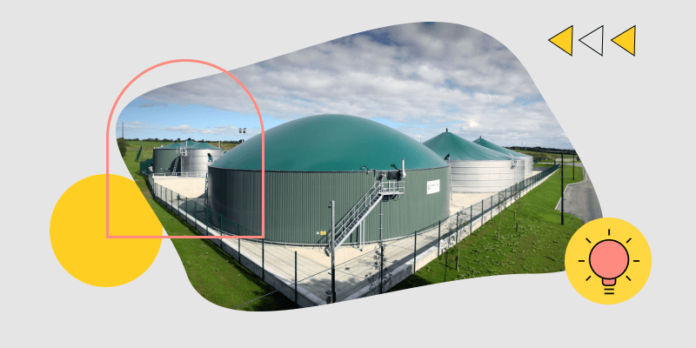 Energy is a critical component of development since it promotes and sustains economic growth and development. Fossil fuels, particularly oil and natural gas, have a finite supply and should be treated as depleting assets, with efforts focused on finding other sources of energy. As traditional energy resources diminish and the environment deteriorates, there is a growing global consensus on the need to save energy and the environment. This has acted as one of the driving factors for the establishment of biogas power plants as biogas is one of the leading sustainable sources of energy in the modern world.

What is biogas and why is its demand increasing?

Biogas is created when bacteria break down organic materials (plant and animal products) in an oxygen-free environment, a process known as anaerobic digestion. Biogas systems recycle organic waste through anaerobic digestion, resulting in biogas, which contains both energy (gas) and useful soil products (liquids and solids).

Biogas systems are a waste management solution that can help with a variety of issues and provide a variety of benefits, including cash streams. For farms, dairies, and businesses, biogas systems turn the cost of waste treatment into a cash opportunity. Converting garbage into power, heat, or car fuel is a sustainable energy source that can help reduce reliance on foreign oil imports, reduce greenhouse gas emissions, enhance environmental quality, and create new jobs. Biogas systems also allow nutrients in the food supply to be recycled, lowering the requirement for both petrochemical and mined fertilizers.

According to Reports and Data, the biogas power plant market size is estimated to grow at a CAGR of 5.6 percent, reaching USD 24.40 billion by 2026 growing from USD 12.24 billion in 2018. Government and private sector support for biogas plant owners in terms of financial incentives and the creation of favorable laws has also been driving market growth.

Certain government legislation had been driving the growth of biogas power plants. For instance, the U.S. Congress established the Renewable Fuel Standard (RFS) as part of the 2005 Energy Policy Act. Renewable fuels must be blended into the transportation fuel supply in the United States under the RFS. Renewable fuels, mostly ethanol, currently provide roughly 10% of the gasoline supply. The RFS establishes fuel levels for several fuel types, including biomass-based diesel, advanced biofuel, cellulosic biofuel, and renewable fuel in general.

The U.S. Farm Bill’s Energy Title (IX) programs have been critical to the biogas industry’s expansion. The USDA’s Bioenergy Program for Advanced Biofuels, established under the 2014 Farm Bill, pays producers to encourage the production of advanced biofuels refined from sources other than maize starch. Currently, the program receives USD 15 million in required funding each year, with USD 20 million in discretionary fund available through 2018.

For Detailed Information Regarding Article Speak to Analyst – https://www.reportsanddata.com/speak-to-analyst-form/1221

Biogas use increasing in other parts of the world

Apart from the U.S., countries around the world have also been increasing the application of biogas. For instance, the Navi Mumbai Municipal Corporation (NMMC) in India has established a biogas plant in the Chinchpada region, and the corporation has successfully completed Maharashtra’s first initiative to manufacture biogas from excreta and wet waste. According to reports, biogas production began by blending excreta from the Chinchpada slum and wet waste from Airoli hotels. Slum dwellers will receive the completed biogas free of charge.

In Serbia, biogas growth is supported by government incentives aimed at increasing the share of renewable energy in total energy consumption. The cost of electricity produced by cogeneration biogas power plants ranges from Euro 17 to 21 per kilowatt-hour.In the registry of privileged and temporarily privileged producers of electricity from renewable energy sources, there are now 131 biogas power plants with a capacity of 110 MW. Only roughly 30 have been completed, while the rest are in the planning stages.

Check out the detailed report here.