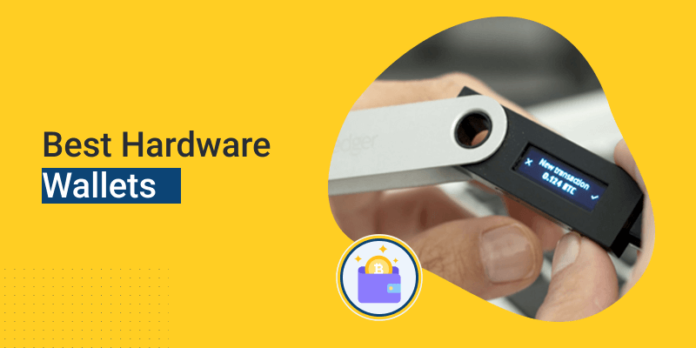 Wallet selection is one of the basic steps when operating with cryptocurrencies. Companies give a large-scale assortment of custom-made cryptocurrency wallets. One of the safest ways to save your digital assets is using a hardware wallet. It’s a small material device that holds offline your private keys.

Let’s take a look at exactly how these devices work and also highlight the best ones.

Hardware Wallet, What is it?

Hardware wallets work as a 2FA device. Only software connects to the Internet, not a wallet. Next, the signature from the key is generated offline. The device is then transmitted to the connected device, where an application connected to the Internet is already open.

The user needs to confirm the transaction when signing. The device is connected to the blockchain and accepts your signature, which is generated from the key. Since you cannot recover the private key from the signature, there is no way to intercept funds.

Which Hardware Wallet Is The Best?

There are over a dozen hardware wallet firms on the market today. Each company offers several models with various features. Consider the opposition of the best hardware wallets, Trezor vs Ledger, and what they are.

Trezor codifies a user’s private keys on the wallet device. You can interact with Trezor via the web interface on the website or using other wallets or services. Even an infected computer cannot enter your private keys. It’s because of secure encryption.

Trezor is Hierarchical Deterministic, so any private key is generated for any currency from a single seed. Thus, a single secret phrase applies to all balances.

Trezor One has a flexible case that looks like a car key, two buttons, and a monochrome display. The display shows a matrix of PIN codes.

Aside from security, the Trezor developers are working hard to bring many innovations to the official app. Trezor One maintains a lot of ERC-20 tokens.

The price of Trezor One is about $ 69. And it makes it one of the cheapest options on the market. Despite the price, it is just as reliable as its more expensive counterparts. The Trezor One was developed in 2013, but it is still considered one of the best in 2021.

Among the advantages of Trezor One are:

The downside of Trezor One is that some assets, such as XRP and TRX, are not supported.

The Model T has a color touch screen to enter a PIN.

Model T has a Shamir backup mechanism. It helps to solve the problem of losing the original phrase. The wallet generates several source phrases that you can store in various locations. To restore a key, some amount of these shares is required, set by the owner.

The undeniable advantages of the Trezor Model T are:

The only downside of the Trezor Model T is its high cost.

It’s an equally worthy competitor to Trezor. Ledger offers a line of devices that are even more discreet. Trezor hardware wallet looks like a simple flash drive, not like a unique device. Other than that, all Ledger devices are HD wallets.

The ANSSI license guarantees additional security. A particular OS called BOLOS and unique technologies like Genuine Check can determine if a device has been jailbroken.

You can manage the funds stored on the device with the companion Ledger Live app usable on mobile and PC. Ledger wallets can also be linked with several third-party apps.

The Ledger Nano S has a rugged, flash drive-like case with two buttons and a display. You can connect it to your computer or smartphone with a mini-USB cable. Users can use the Ledger Live app as a bridge or pin it to other software wallets.

Wallets for various currencies in Ledger are presented in the form of applications. Depending on the size, the Nano S can store 3 to 20 applications. It somewhat limits the choice of assets that can be stored on it.

The wallet is priced at $ 59, making it the cheapest hardware wallet.

The advantages of the Ledger Nano S include:

The disadvantage of the Ledger Nano S wallet is only a few problems with microtransactions.

The Ledger Nano X wallet is a more practical and updated version of the Nano S wallet. This device is larger and more durable. It has a bigger screen and buttons. The Bluetooth connection allows you to pair your wallet with your smartphone and work with it anywhere.

The cost of Nano X is about $ 119. This upgraded variant is cheaper than the Trezor Model T but lacks a touchscreen or additional safety features.

The advantages of the Ledger Nano X include:

The downside of the Ledger Nano X is the fact that it is not open source. Ledger and Trezor wallets are safe. It’s an easy-to-use solution for storing crypto assets. Today the line between companies has primarily evaporated, and they are equally good.