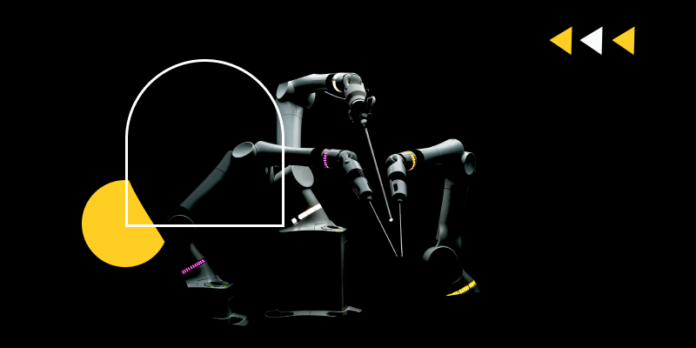 The healthcare industry has evolved tremendously and its future lies with the emergence of novel technologies that advance at an unprecedented speed. The advent of surgical robotics disrupted the medical industry and the way patients are treated in hospitals.

The minimally invasive surgeries not only reduced the recovery period of the patient but also make the treatment safer and effective. The incorporation of artificial intelligence in surgical robotics (AI) has opened new doors of opportunities in the medical sector.

According to Allied Market Research, the global surgical robotics systems market is expected to reach $15.01 billion by 2027, growing at a CAGR of 13.7% from 2019 to 2027. Increase in demand for automation in the healthcare industry, surge in R&D activities, and shift in the trend toward advanced robotic minimally-invasive surgeries drive the growth of the market.

Recently, Medtronic PLC, the leading market player in the healthcare sector, declared the first gynecological procedures with the Hugo™ robotic-assisted surgery (RAS) system. Given the complexities that can arise during such surgical procedures, minimally invasive surgical care offers a great chance for women to lower the risks. What’s more, such surgeries are just the beginning.

Apart from the developed countries, emerging economies such as China and India have shown rise in investments in surgical robotics. For instance, Smith Nephew, the leading market player in the medical technology industry declared the launch of its latest real intelligence suite of technology solutions along with the next-generation robotics platform, the CORI Surgical System in India. Over the last few years, the demand for surgical robotics systems has gained traction in India. The countries have witnessed around 200,000 joint replacement surgeries per year and the need for use of robotics in surgeries has increased more than ever. Keeping this in mind, the company launched CORI Surgical System, a portable and suitable for crowded operating rooms.

The future lies with automation:

The Covid-19 pandemic proved favorable for the adoption of automation. Restrictions regarding social distancing and need to avoid physical contact increased the demand for automation in every industry across the globe and surgical robotics is no exception.

Since the approval of the Da Vinci surgical robotic system, the world has witnessed rapid advancements in minimally invasive robotics surgeries. Smaller incisions mean lesser bleeding during surgeries and improved visibility for surgeons. Such perks of surgical robotics can no longer be ignored. What’s more, the advent of AI in surgeries has helped eliminate human error altogether.

The incorporation of AI in healthcare has given rise to the second wave of robotic surgery. Such robotic systems offer data collection and possess analytical capabilities, which help in removing the limitations of human-driven robotic arms.

While surgeons will always remain the decision-makers during the surgeries, AI-based surgical robotic systems would help them make data-driven, informed decisions during the surgical procedures. Apart from AI-assisted robotic surgeries, researchers have been developing tiny surgical robots, nanobots to cure diseases by entering the body of patients. What’s more, a team of researchers has already developed nanobots coated with gold nanowire that can freely roam through blood and destroy or absorb pathological bacteria without compromising patients’ defense mechanisms. Such developments and the influence of AI on medical equipment and robotic surgeries have opened new doors of opportunities for both patients and surgeons. In addition, the advent of virtual reality and smart surgical glasses are on the verge of becoming the norm and help surgeons to treat their patients in less time and improve recovery period as well. Today’s ever-evolving technology has the power to boost efficiency during surgeries. From pre-planning to perform actual surgeries, advanced technologies could transform the traditional ways of surgical procedures and give rise to a new era driven by AI and remotely-operated surgical robotic systems.

Are Robotics And Machinery The Future Of Industries?

The Basics of Metal Stamping and Forming

Latest CAD Trends That Will Transform Industries In 2021 & Beyond